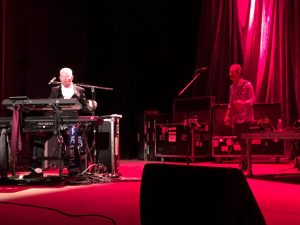 The first time I saw Joe Jackson live was in the autumn of 1982. He was on tour supporting his record Night and Day. I was a freshman in my first semester at Michigan State University in East Lansing. The show was at Hill Auditorium on the University of Michigan campus, but I didn’t even know how to get to Ann Arbor, just 60 miles to the south. I arrived late, but in time to hear Joe dress down a heckler who yelled “that’s bullshit” when he announced they were going to play “a slow song” (“Slow Song” is the final tune on the Night and Day album). Joe shot back at the unsuspecting wag, “Bullshit it may be, but I have the microphone and you don’t. So sit down and shut the fuck up!”

It was a humbler, grateful Joe Jackson that performed at the Michigan Theater this time around. During the encore he thanked the audience saying, “I think this was a sell out. Thanks for that. When we play anywhere, I don’t take anything for granted. We rejoice when anyone buys a ticket. We appreciate it.” And the audience was just as appreciative of the stellar set, culled from his brilliant and eclectic 40-year career (I’ve included the set list below).

Joe opened the show by himself, playing five songs alone at the keyboard. The first number was a poignant arrangement of “It’s Different for Girls” from 1979’s I’m the Man, after which he quipped, “Good evening. I’m the opening act.” Then Joe’s long-time side man, veteran bassist Graham Maby, joined him on stage. The crowd roared as they banged out the classic “Is She Really Going Out with Him?” as a duo. The other band members followed in succession. Drummer Doug Yowell joined in on “Real Men,” and finally guitarist Teddy Kumpel on “You Can’t Get What You Want (til you know what you want)”.

They performed a number of tunes from Joe’s recent recording Fast Forward, a lyrically mature social commentary, featuring Joe’s signature wry wit and characteristically thoughtful piano melodies. The band clearly enjoyed playing the newer material, especially an unrecorded new guitar-rock song, “Fabulously Absolute.” They also mixed in some fun covers – a solo piano version of Joni Mitchell’s “Big Yellow Taxi,” a rockin’ version of ABBA’s break-up anthem “Knowing Me, Knowing You,” and Television’s “See No Evil” (which also appears on Fast Forward). Highlights for me were high-energy renditions of “Sunday Papers” and “One More Time,” both from Joe’s debut record Look Sharp! They closed with “Slow Song” to appropriately bookend the 35 years since that Hill Auditorium show.

Bullshit it may have been back then, but I’m grateful that Joe still has the microphone.

It’s Different for Girls
Home Town
Be My Number Two
Big Yellow Taxi (Joni Mitchell cover)
Fast Forward
Is She Really Going Out With Him?
Real Men
You Can’t Get What You Want (Till You Know What You Want)
A Little Smile
Kings of the City
Poor Thing
Another World
Knowing Me, Knowing You (ABBA cover)
Fabulously Absolute
Sunday Papers
Keep On Dreaming
Ode to Joy
Steppin’ Out